Randstad (RAND NA) ... put-ting away for a rainy day

Hays (HAS, mkt cap £969m) reported its full year numbers yesterday. As expected, the outlook appears cloudy and so it opened around 70p/shr, or 9% down. I closed my short in Hays and long in Michael Page (MPI, mkt cap £1.0bn) (see link). I may have jumped the gun. Hays could go lower. But then I’d made 11% on my HAS short, lost 3% on my MPI long and I’d been short HAS by a factor of 2 to long MPI on 1.That seemed a good return in just over a week.

What I reckon should go lower on the back of Hays’ outlook statement is Adecco (ADEN VX, mkt cap CHF8.0bn) and Randstad (RAND NA, mkt cap €4.4bn); the world’s 1st and 2nd largest recruitment companies, respectively. So I looked at the prices of puts in RAND.

If fundamentals were fully at play, I can see both ADEN and RAND steadily falling as we get closer to 2013. The market is expecting 12% EPS growth for RAND in 2013, rising to 17% growth in 2014, paying a P/E of 10.5x for those 2013E earnings. That seems optimistic to me and predicated on another dollop of new money. Trying to work out what central bankers will do makes second guessing where this market will be by year’s end pretty tough. If the ECB President Draghi gets his way then the market could get a shove higher. However, if BUBA President Weidmann keeps resisting, then it’s difficult to see what props euro land up against the weak fundamentals.

Either way, looking at the RAND puts, I was amazed. December puts in Randstad seem proper value. With the shares trading today at €25.5, December puts with a €20 strike could be bought for c. 35 €cents. RAND found a floor as low as €9.35 in the big bout of chaos we had in 2008/09. If Draghi fails to deliver, economic data remains weak and chaos reigns again, then that €9-10 level could be revisited before year end. In that event, a €20 strike costing 35 €cents, delivers me €10-11; or c. 30x my money. That seems to be astonishing odds and I can’t understand why they’re so high. Maybe the potential for euro weakness lessens the return? Even so, I still reckon it’s staggering value. So I tucked away some puts for a rainy day.

Yesterday I shorted Hays (HAS) and went long Michael Page (MPI) at a ratio of 2:1. As I can’t see a hiring frenzy on the horizon and both stocks don’t appear cheap, I fully expect both to go down. But I reckon that Hays is not as good a business as Page and has more downside as a result. On the other hand, if the monetary authorities provide another dose of money salts to perk up the risky assets, then Page should blitz upwards while Hays may take a jauntier stroll. The charts show this all better in pictures than I can say in words ...

Email ThisBlogThis!Share to TwitterShare to FacebookShare to Pinterest
Labels: Pairs

Experian (EXPN) ... a lot of acquisitions, capex and director selling ...

I have a short position in Experian. I have shorted the shares for the following reasons:

What does Experian do?

Experian is a credit and marketing services company. The company retains databases on persons and businesses to provide credit scoring/checking and monitoring to then sell to businesses and consumers.

Experian’s revenue increased from $3,064m to $4,487m during the period 2006-12; representing a CAGR in revenue of 6.6%. However, during this period the group has also spent c. $4.5bn on acquisitions. Experian’s accounts suggest that at the point of acquisition, the bought businesses were generating a combined c. $1.4bn in full year revenue. Certain parts of the business were also disposed of during this period, totalling c. $1.5bn, and c. $695m of associated revenue looks to have been lost through these disposals. I reckon that means about $720m of revenue has been gained from net acquisitions since 2006, or roughly half of the group’s total revenue gain. Given that the total CAGR in revenue was 6.6%, and net acquisitions have contributed half to the revenue gain, it doesn’t seem like the core business has been growing that strongly; maybe keeping pace with inflation. 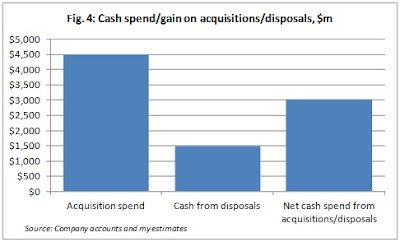 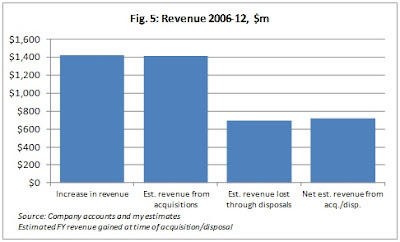 What has increased strongly over recent years is the group’s EBITDA margin. My estimate is that the group’s EBITDA margin has risen from 26.7% in 2009, to 33.1% in 2012. I would add that I have ignored the adjustments the group makes under its so-called “Benchmark” approach. Management’s performance and remuneration is set against this “Benchmark” measure. I find this odd as under this measure, while reported PBT totalled $600m, $656m and $689m in 2010, 2011 and 2012 respectively, Benchmark PBT was reported to be, 42%, 40% and 64% higher at $854m, $920m and $1,128m respectively. Others may choose to ignore these adjustments as “one-off”, but they don’t appear particularly “one-off” to me.

A competitor of Experian is the US based company Equifax (EFX, mkt cap $5.5bn). This is a broadly similar although smaller business to Experian. 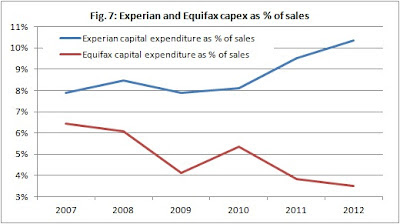 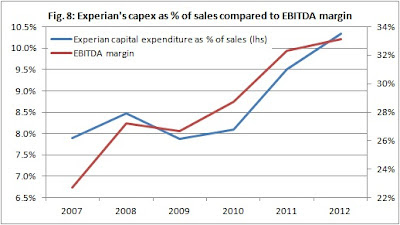 When looking at the group’s acquisition expenditure and trying to estimate valuations paid, I came across this, which I found to be fairly amusing on one of Experian’s acquisitions.

In 2007, Experian sued a US based company called Mighty Net for trademark infringement. At the time, The President of Experian's Consumer Direct segment, Ty Taylor, was reported to have said "We believe it is important to not only protect our intellectual property, but also to protect consumers against such companies [Mighty Net]." My emphasis added.

Experian spent $4,520m in cash on acquisitions during 2006-12 and it appears that bought revenue totalled $1,512m at the various points of acquisition. This equated to 3x sales. On a profit after tax (PAT) level, the group also details what the acquisitions provided from date of acquisition to financial year end. Using the ratio of revenue reported from point of acquisition to financial year end and revenue reported from financial year beginning to date of acquisition, it is possible to get a proxy for what full year PAT may have been. I estimate this to have totalled $139m for the group’s acquisitions in the years they were purchased. I have then assumed that the tax rate was 28% to determine what a likely profit before tax (PBT) would have been. I estimate this to have totalled $193m that the acquisitions collectively achieved in the years they were purchased. On this basis, Experian appears to have paid $4,520m for companies which were collectively achieving $193m in PBT at the time of acquisition; or 23.4x PBT. I reckon that is expensive. I have also added a row to estimate what potential EBITDA may have been were a 28% margin to have been achieved against the acquired revenues. This would have totalled $423m and imply a price paid of 10.7x EBITDA. Again this seems expensive.

Management has lobbed out a sizeable number of shares over recent years. In total the directors have sold £42m of stock since June 2010 and bought £0.2m. Some of this is to satisfy tax on option entitlements, but even so. £200k out of £42m is not much of a token gesture.

The shares trade on 18.7x current year earnings, falling to 16.7x 2014 earnings. On an EV/EBITDA basis the company is valued at 11x current year EBITDA, falling to 10x 2014 EBITDA. It pays a prospective dividend yielding 2.2%, and has c. $1.9bn of net debt. This is not a cheap stock either on a relative basis or by its historic average.

It would also appear that it continues to receive downgrades to analyst consensus earnings estimates. Just since May, its 2013 EPS estimate has been cut but c. 19%, while the shares have rallied c. 10% during the same period.

So for the above reasons, I have shorted the stock.

Trinity Mirror (TNI) ... who's the best value of them all?

I have a long position in Trinity Mirror. I started buying at 38p and continued to hoover them up until they hit 26p. A lot of hoovering went on. TNI is about the best value stock I’ve seen for a long time. I’m long the shares for the following reasons:

Despite TNI’s revenue having fallen by £225m (23%) during 2007-11, TNI chucks off cash by the bucket load. Since January 2008, the group has generated £461m of operating cash. That’s 4.3x its current market cap of £107m. By way of comparison, during the same period, the FTSE 250 company, MITIE (MTO), has generated marginally less in operating cash. However MITIE has a market cap of £1bn.

Where the concern lies for TNI is in its gearing, pension deficit and the outlook for newspapers.

At the end of 2008, TNI had £378m in net debt; equivalent to 3x EBITDA. Net debt is now £181m, as at the end of June 2012; equivalent to 1.3x EBITDA. Even accounting for a further decline in revenue going forward, TNI is likely to be debt free by 2014-15. As I expect newspapers to still be around for at least another decade (although circulations may have more than halved), the group is likely to be capable of generating c. £50m in free cash flow pa until 2022. After discounting, I reckon that’s worth more than its £106m market cap. Probably at least four times as much. It’s worth bearing in mind that when debt free, it will also be free of its net interest cost. In 2011, net interest alone was equivalent to 5p/shr. At today’s price that would be equivalent to a 12% dividend yield.

New management and the outlook for newspapers

David Grigson took over as Chairman in May 2012. He has previous in that he helped to steer Reuters back on course, which culminated in its merger with Thomson in 2008. He was quick to transition the former CEO, Sly Bailey, out of the picture and is currently looking for a new CEO.

I fully expect newspaper circulations to more than halve over the next decade and margins to decline. But even so, I reckon at 42p/shr, TNI still appears to present incredible value.

So for the reasons above, I may add to my long.